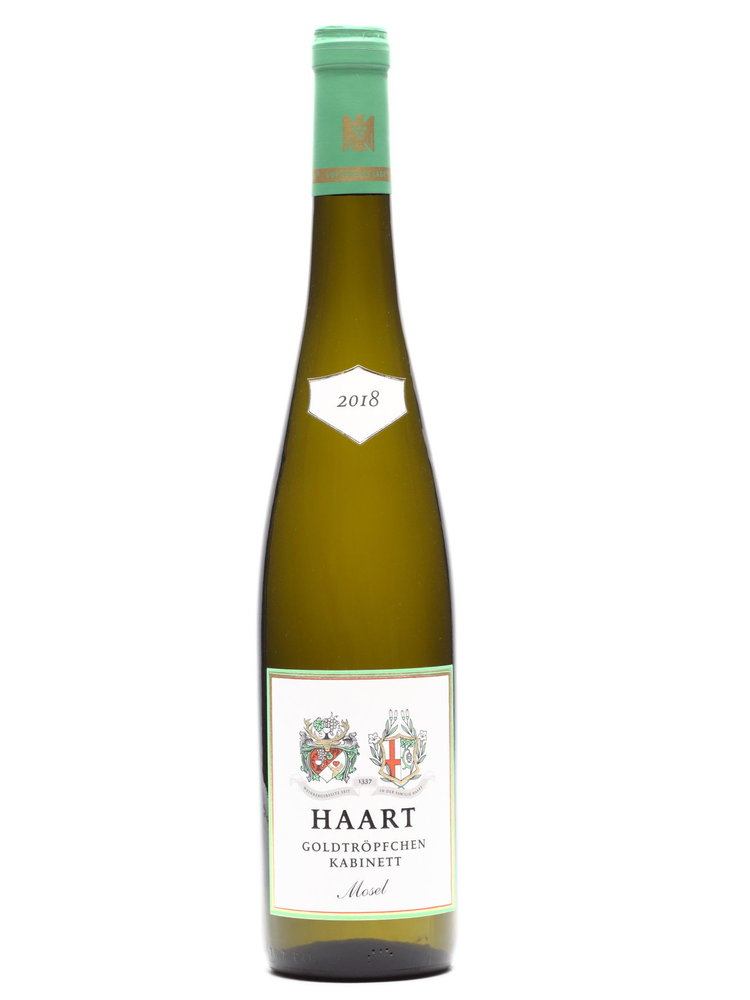 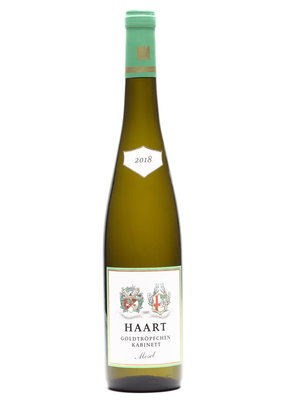 The 2018 Goldtröpfchen Kabinett is attractively reductive yet super precise and clear on the nose where ripe, concentrated white peach aromas are displayed. The palate is ripe, lush and salty-piquant, with lots of gusto and sensual character but also finesse, elegance and precision. There are coolish flinty notes on the nose and palate. This a gorgeous wine with very good length, energy and concentration. From lower, flatter and warmer plots with bigger, less concentrated grapes. Tasted as a sample some days before bottling in April 2019.

"The weather in 2018 was similar to 2011 and 2003," finds Johannes Haart, who reports that there were "sufficient rainfalls here in the Mosel, in contrast to other regions Germany....We were forced to harvest early to avoid heavy and clumsy wines. The acidity is analytically pretty low, but so is the pH, which caused lovely lively and easy-selling wines, whereas Riesling freaks might miss more raciness. However, the 2018s are substantial, with lots of power and raciness, but they are also well structured and will age very well. We picked from September 19 to October 20 and picked a little bit of botrytis too, like in 2011. Sweet as they were, the raisins were immediately on TBA level, so we didn't produce a BA. However, we managed to sort some gold-capsuled and several standard Auslesen based on healthy fruits; we simply had enough fruit. For me 2018 is a very good year for sweet wines. We had enough ripeness and good structures, and the sweetness matches very well with that."

Haart started bottling in March and April but also said there were very slow fermentations of what should become dry wines, for example, the "GG's" that were still at 15 to 20 grams of unfermented sugar in April. Said Haart, "I don't have any doubts: When summer comes, the wines will seem too dry."

Readers should invest in Haart's concentrated and structured 2017s and the two wines of the 2016 vintage that have been released only now: the Kreuzwingert GG and the Goldtröpfchen Auslese #34. The 2018s that have been released so far are also excellent, but they already drink very well and there is no need to age them that long.